Q&A: Is There Something Inherently Unsustainable About Clothes Made From Non-Organic Crops And Fabrics? After All Cotton Is "Natural" Isn't It? 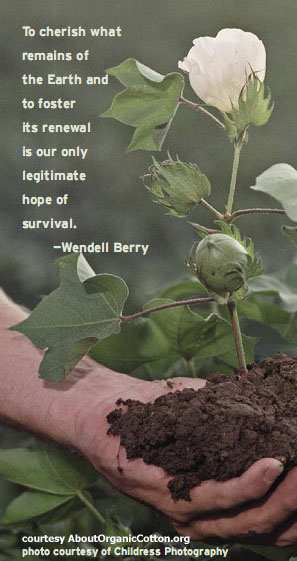 There's a lot of intentional confusion created in the marketplace by companies that don't want to go to the effort or expense of making their products truly environmentally friendly for people and the planet by getting organic certification.

Unfortunately, there is a lot of greenwashing going on, where a company uses the word "natural" to make a product seem eco-friendly. However, while consumers perceive the word to be synonymous with "goodness," it actually has no official definition or government standards associated with it.

It attracts attention. Natural is good, unnatural is bad. These are the reasons it's used. There is really nothing "natural" about non-organic food or clothing. The word "natural" does not mean that a product lacks toxicity.

On the other hand, "Certified Organic" according to the USDA NOP (U.S. Department of Agriculture National Organic Program) is a true, specifically defined standard for what constitutes an organically grown crop whether for food or textiles (fabrics, clothing, bedding, towels, etc).

Let's Be Accurate, Call It "Non-organic" Instead of "Natural"

Let's see what "natural", that is "non-organic", cotton may look like. Non-organic cotton is one of the top crops for its use of insecticides. The typical spraying application results in volatile organic compounds released into the air, contributing to green house gases. Additionally, such spraying harms the health of the soil and pollutes ground water, lakes, and streams.

Five of the top nine pesticides used on cotton in the U.S. (cyanide, dicofol, naled, propargite, and trifluralin) are known cancer causing chemicals. All nine are classified by the U.S. EPA as Category I and IIâ€” the most dangerous chemicals. Depending on the practices involved, it can take up to a pound of such chemicals to grow the cotton for one pair of pants and a shirt.

Not only do these chemicals pollute the air, water, and soil but they're also retained in the crops as they're grown. In addition, other chemicals are added to the mix during the manufacturing processes. Most people with Multiple Chemical Sensitivities (MCS) can't wear non-organic clothing. It literally affects their health.

Organic crops are grown without the use of toxic and persistent pesticides and synthetic fertilizers. Organic matter and crop rotation are used to build stronger, more nutrient rich soil which retains water more efficiently than non-organic farming. In addition, federal regulations prohibit the use of genetically engineered seed for organic farming.

Non-organic wool also uses substantial chemicals which may be unhealthy. In organic sheep production, sheep must be fed 100% organically-grown feed and forage (pastures). The use of synthetic hormones, vaccinations, and genetic engineering is prohibited, as is the use of synthetic pesticides (internal, external, and on pastures).

There are two key distinctions in organic livestock management. First is the elimination of "dipping," a method of controlling external parasites in which sheep are submerged in pools containing organophosphate-based parasiticides. Studies have indicated that prolonged exposure to sheep dip pesticides cause changes in the nervous system of humans. (Imagine how the sheep feel about this process!) Moreover, disposal and "runoff" of dips can contaminate ground water supplies.

Secondly, in order to maintain their certification, organic livestock producers cannot exceed the natural carrying capacity of the land, thus preventing the devastating effects of overgrazing.

I think this provides a pretty good idea of the distinctions between "natural" and "organic." Some entities have tried to discredit organic certification but that's only done because they don't want to spend the effort and cost involved in cleaning up their act.
Posted by Ed Mass, President, Yes It's Organic, YesItsOrganic.com at 10:46 PM No comments: Links to this post